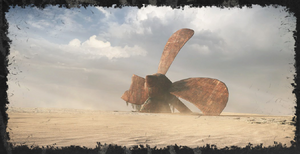 The Great White is the southern half of the map in the Mad Max video game. See Regions for more info.

"The Great White used to be a vast ocean. No one knows how the water withdrew from the land, we only know that it now lies barren, without a drop to its name. What once used to be home to coral, fish and algae is now a desert of salt, sand and sharp rock. The ocean was mankind's own waste basket; everything was dumped into the ever swallowing water during the brief existence of civilization on the shores. Refuse from the hustle and bustle times of the last century litter the vast lands - barrels of toxic waste, the hulls of ocean liners, human remains, plastic refuse, rusted automobiles, and mankind's detritus.

Those who find themselves in the Great White are generally just passing through. The lands here and so inhospitable, cruel, and unforgiving that very few ever settle down here. The bombed out shipwrecks which litter the Great White are often used as shelter by wanderers. Sometimes groups of people settle inside them for a short time before moving on. Only Jeet and Gut Gash have managed to build something even resembling a functional living situation here." - Mad Max video game description