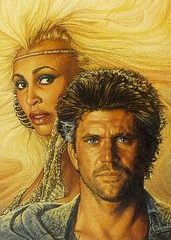 Mad Max Beyond Thunderdome is a 1985 Australian post-apocalyptic film directed by George Miller and George Ogilvie, written by Miller and Terry Hayes and starring Mel Gibson and Tina Turner. It is the third installment in the action movie Mad Max series, its story taking place three years after that of the previous film. The original music score was composed by Maurice Jarre. A fourth movie in the Mad Max series, remained in development for over two decades, before Mad Max: Fury Road, a prequel to the original film, was finally greenlit and commenced production in 2012. Mad Max: Fury Road is slated for release in 2014. Contents

Max Rockatansky rides a camel-drawn wagon across the Australian desert when he is attacked by Jedediah, a pilot flying a Transavia PL-12 Airtruk, who steals his belongings and vehicle. Max continues on foot and stumbles upon the only nearby human outpost in the wasteland — the seedy community of Bartertown, founded and run by the ruthless Aunty Entity.

In Bartertown, electricity, vehicles, and functioning technology depend on a crude methane refinery fueled by pig feces. The refinery is located in the Underworld area beneath Bartertown and is operated by the diminutive Master, who is carried around by his enormously strong bodyguard, Blaster. "Master Blaster" holds an uneasy truce with Aunty for control of Bartertown. Master, however, is beginning to exploit his position with energy "embargoes," challenging Aunty's leadership. She is furious with him but cannot challenge him publicly, as Master is the only one with the technical know-how to operate the refinery. The controlled chaos of Bartertown is maintained by a set of inflexible laws, including one that states that no contract can be broken for any reason.

Upon entering Bartertown, Max meets the Collector, who recommends his talents to Aunty Entity. After being tested in a difficult audition, Aunty recognises Max as a resourceful fighter and strikes a deal with him to provoke a confrontation with Blaster in the Thunderdome, a gladiatorial arena where conflicts are resolved by a duel to the death. Max enters Underworld in order to get a look at Master Blaster; here he also befriends Pig Killer, a laborer convicted of slaughtering a pig to feed his family. While there, Max discovers that Blaster is exceptionally strong but extremely sensitive to high-pitched noises. Max finds his stolen vehicle in Master Blaster's possession and, in an effort to size up Blaster's fighting strengths, confronts them both, resulting in the necessary challenge to enter Thunderdome.

The rules of Thunderdome, as chanted by onlookers crowding the arena, are simple: "Two men enter, one man leaves." After a difficult match with various weapons, Max defeats Blaster with the aid of a high-pitched whistle, but he refuses to kill him upon discovering that Blaster has a developmental disability and the functional mentality of a child. An enraged Aunty has Blaster executed and invokes the law against Max since he broke his agreement with her: "Bust a deal, face the Wheel." The Wheel is divided into sections marked with outcomes that range from acquittal to death; when spun for Max, it stops on "Gulag," meaning exile to the desert wasteland. He is placed on horseback and sent out of Bartertown, riding until the animal collapses and dies from exhaustion.

Some time later, Max - now near death from exposure - is saved by a group of children led by Savannah Nix. The children, hardened to the desert environment, are descendants of the survivors of a nearby crashed Qantas Boeing 747. They have formed a tribe in the sheltered oasis. Clinging to the hope of rescue, they keep their memories of the past civilization alive in the form of spoken "tells," including the return of the messianic "Captain Walker" who will repair the aircraft and return them to civilization. The "tell" explains that Flight Captain G.L. Walker at one point took the adults to seek help, promising they would be back to rescue the rest, but never returned. One of the kids is seen with a "sonic," a record attached to a stick. Max looks so much like Walker, the children believe that he has indeed returned to take them to "Tomorrow-morrow Land." After nursing him back to health, they are shocked that Max insists that they remain in the relative safety of the oasis, knowing that the only "civilization" within reach is Bartertown. Some of the children decide to leave anyway, determined to find "Tomorrow-morrow Land," so Max goes after them.

Max catches up with them at the outskirts of Bartertown. They sneak in, intent on finding Master. Without Blaster to protect him, Master is little more than Aunty's slave. Max and the children free him with Pig Killer's help, but the guards are alerted and give chase, resulting in a series of explosions in the methane refinery. Reaching Jebediah's hideout, the children find out that the "sonic" is just an old French learning record. Max coerces Jedediah to help them escape in his plane, but there is too much weight and not enough runway between them and the attackers' vehicles. Max takes the nearest vehicle and drives it in front of the plane, smashing through Aunty's approaching forces and allowing the plane to take off. Aunty finds Max, but spares his life out of respect for his abilities and departs.

Some time later, the children are in the ruins of a destroyed Sydney, lit up by hundreds of fires and lights. Savannah, the leader of the children, recites a nightly "tell" of their journey and the man who saved them.

The film was the first Mad Max movie made without producer Byron Kennedy who was killed in a helicopter crash in 1983. There is a title card at the end that says, "...For Byron".

Miller co-directed with George Ogilvie with whom he had worked on The Dismissal (1983) mini series. They used a group workshopping rehearsal technique that they had developed.[4]

The main location was at the mining town of Coober Pedy with the set for Bartertown built at an old brickworks in Sydney's western suburbs, and the children's camp shot at the Blue Mountains.[4]

The film was a popular success, although it performed less well in Australia than Mad Max 2.[4]

Critical reaction to the film was generally positive, it holds an 81% rating on Rotten Tomatoes,[5] although reviewers were mixed regarding whether they considered the film the highest or lowest point of the Mad Max trilogy. Most of the criticism was focused on the children in the second half of the film, which many felt was too reminiscent of the Lost Boys from Peter Pan.[6] On the other hand, critics praised the Thunderdome scene in particular; critic Roger Ebert called the Thunderdome "the first really original movie idea about how to stage a fight since we got the first karate movies" and praised the fight between Max and Blaster as "one of the great creative action scenes in the movies."[7]

Further scenes that would have fleshed out the character of Max much more than shown in the final movie were cut before international release for the sake of reducing the running time.

Sourced from [[1]]
Retrieved from "https://madmax.gamepedia.com/index.php?title=Mad_Max_3_-_Beyond_Thunderdome&oldid=3968"
Category: