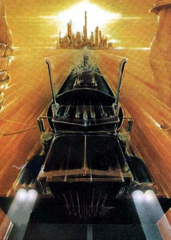 Mad Max 2 (also known as The Road Warrior and Mad Max 2: The Road Warrior) is a 1981 Australian post-apocalyptic action film written and directed by George Miller. The film is the second installment in the Mad Max film series, with Mel Gibson starring as Max Rockatansky. The film's tale of a community of settlers moved to defend themselves against a roving band of marauders follows an archetypical "Western" frontier movie motif, as does Max's role as a hardened man who rediscovers his humanity when he decides to help the settlers.[4] Filming took part in locations around Broken Hill, in the outback of New South Wales.[5]

The film's comic-book post-apocalyptic/punk style popularised the genre in film and fiction writing. It was also a box office success and received six nominations at the Saturn Award ceremony, including Best Director for Miller, Best Actor for Gibson, Best Supporting Actor for Spence and Best Writing for Miller, Hayses and Hannant, winning Best International Film. Eventually, Mad Max 2 developed into a cult film: fan clubs and "road warrior"-themed activities continue into the 21st century. The film was followed by Mad Max Beyond Thunderdome in 1985, with a fourth film in the series, Mad Max: Fury Road, slated for release in 2014.

Since the oil supplies have nearly exhausted in the near future, law & order has begun to break down, and MFP itself is no longer functional since the global war. Max "Mad Max" Rockatansky, who left MFP over 5 years ago, traumatised by the death of his family, roams the now depopulated and desolated desert in his scarred, black supercharged V-8 Pursuit Special (which he stole to kill the motorcycle gang who killed his family), scavenging for food, drink, and petrol. His only companions are an Australian Cattle Dog, and a rare functioning firearm – a sawn-off shotgun – for which ammunition is very scarce.

The film starts with Max running for his life, trying to escape from a group of gang members, led by a crazed motorcycle rider named Wez. He manages to crash two of the gang member's vehicles and injure Wez, but he escapes. After collecting some fuel from the destroyed cars and checking a local Mack semi-truck he found on the road, he checks nearby autogyro for fuel. The autogyro is boobytrapped, but Max overpowers the pilot hiding nearby; in exchange for his own life, the pilot tells Max about a small oil refinery nearby in the wasteland. Max arrives just as the marauders, a motley collection of cars and motorbikes, besiege the compound. Their leader, a large, muscular man with a hockey mask over his disfigured face called "The Humungus," tries to convince the settlers to surrender the facility in exchange for safe passage out of his territory.

A group of settlers attempt to break out of the compound, but the marauders capture, torture, rape and kill them. Max makes a deal with the mortally-wounded sole survivor: he will bring the settler back to the compound in exchange for a tank of petrol. The man dies shortly after Max returns him, and the settlers' leader, named Pappagallo, reneges on the deal; the settlers are on the verge of killing Max when the marauders return, and Humungus repeats his offer. Max offers Pappagallo another deal: he will retrieve an abandoned Mack semi-truck, capable of hauling the tanker trailer that the settlers use to store the fuel they refine, in exchange for freedom, his vehicle, and to carry as much as petrol as he can. The settlers accept, but keep his car as a collateral. Max sneaks out, joining forces with the autogyro pilot, or "Gyro Captain."

Max drives the semi back to the compound, evading Humungus' men. The settlers want Max to escape with the group, but Max opts to collect his petrol and leave. However, his attempt to break through the siege fails: Wez gives chase in The Humungus's nitrous oxide-equipped car and runs Max off of the road, wrecking his Pursuit Special and seriously wounding him. The marauders kill Max's dog with a crossbow and attempt to siphon the fuel from the Pursuit Special's tanks, but trigger an explosive booby trap, which Max set up, that destroys the car. Max is left for dead, but the Gyro Captain rescues him and flies him back to the compound.

Despite his injuries, Max insists on driving the repaired truck with the fuel tanker. He leaves the compound in the now heavily armored truck, accompanied by a "Feral Kid" he has befriended, and with several settlers in armored vehicles providing protection. The Humungus and most of his warriors pursue the tanker, leaving the remaining settlers free to flee the compound in a ramshackle caravan and buses. Papagallo and the settlers defending the tanker are killed during the chase, and the Gyro Captain is shot down. Max and the Feral Kid find themselves alone against the marauders, who continue their pursuit. Wez boards the truck to kill the two, but a head-on collision with Humungus' car kills both Wez and Humungus. Max loses control of the tanker, and it rolls off the road. As the injured Max carries the Feral Kid from the wrecked tanker, he sees not oil, but sand, leaking from the tank.

The truck and its trailer are thus exposed as a decoy, allowing the other settlers to escape with the precious fuel in oil drums inside their vehicles. With Papagallo dead, the Gyro Captain succeeds him as their chief and leads the settlers to the coast, where they establish the "Great Northern Tribe." Max remains alone in the desert, once again becoming a drifter, leaving the Feral Kid (as an adult and the Northern Tribe's new leader) reminiscing about him.

After Mad Max George Miller received a number of offers from Hollywood, including to direct First Blood. He met Terry Hayes when the latter did the novelisation of Mad Max and together they worked on a screenplay for another film, a special effects horror movie. However after a while Miller became more interested in doing a sequel to Mad Max, as a larger budget would allow him to be more ambitious. He hired the old Metro Cinema in Kings Cross[clarification needed], and Brian Hannant came on board as co-writer and second unit director. Miller says he was greatly influenced by the films of Akira Kurosawa.[1]

The movie was shot near Broken Hill over 12 weeks. The movie had to have several cuts to ensure it received an "M" rating.[1] The movie portrays an auto-gyro as having the ability to land like a helicopter, but this is not the case. An auto-gyro cannot hover.

The movie was a commercial success, earning $3.7 million in rentals in the Australia and $11.3 million in the US and Canada.[1]

Mad Max 2 received critical acclaim and is regarded by many as one of the best films of 1981.[10][11] The film holds a 100% rating on Rotten Tomatoes as of May 2010.[12] Film critic Roger Ebert of the Chicago Sun-Times gave the film three-and-a-half stars out of four and praised its "skillful filmmaking," and called it "...a film of pure action, of kinetic energy", which is "...one of the most relentlessly aggressive movies ever made". While Ebert points out that the movie does not develop its "...vision of a violent future world ... with characters and dialogue", and uses only the "...barest possible bones of a plot", he praises its action sequences. Ebert calls the climactic chase sequence "...unbelievably well-sustained" and states that the "...special effects and stunts...are spectacular", creating a "...frightening, sometimes disgusting, and (if the truth be told) exhilarating" effect.[13]

In his review for The New York Times, Vincent Canby wrote, "Never has a film's vision of the post-nuclear-holocaust world seemed quite as desolate and as brutal, or as action-packed and sometimes as funny as in George Miller's apocalyptic The Road Warrior, an extravagant film fantasy that looks like a sadomasochistic comic book come to life".[8] In his review for Newsweek, Charles Michener praised Mel Gibson's "easy, unswaggering masculinity and hint of Down Under humor may be quintessentially Australian but is also the stuff of an international male star".[14]

Gary Arnold, in his review for The Washington Post, wrote, "While he seems to let triumph slip out of his grasp, Miller is still a prodigious talent, capable of a scenic and emotional amplitude that recalls the most stirring attributes in great action directors like Kurosawa, Peckinpah and Leone".[15] Pauline Kael called Mad Max 2 a "mutant" film that was "...sprung from virtually all action genres", creating "...one continuous spurt of energy" by using "...jangly, fast editing". However, Kael criticised director George Miller's "...attempt to tap into the universal concept of the hero", stating that this attempt "...makes the film joyless", "sappy", and "sentimental".

The film's depiction of a post-apocalyptic future was widely copied by other filmmakers and in science fiction novels, to the point that its gritty "...junkyard society of the future look...is almost taken for granted in the modern science-fiction action film."[4] The Encyclopedia Of Science Fiction says that Mad Max 2, "...with all its comic-strip energy and vividness...is exploitation cinema at its most inventive."

Richard Scheib calls Mad Max 2, "...one of the few occasions where a sequel makes a dramatic improvement in quality over its predecessor." He calls it a "kinetic comic-book of a film," an "... exhilarating non-stop rollercoaster ride of a film that contains some of the most exciting stunts and car crashes ever put on screen." Scheib states that the film transforms the "...post-holocaust landscape into the equivalent of a Western frontier," such that "...Mel Gibson's Max could just as easily be Clint Eastwood's tight-lipped Man With No Name" helping "...decent frightened folk" from the marauding Indians.[4]

Sourced from [[1]]
Retrieved from "https://madmax.gamepedia.com/index.php?title=Mad_Max_2_-_The_Road_Warrior&oldid=609"
Category: